In the summer of 2011, Otto von Habsburg was buried in Vienna. He was the last Archduke of the Austro-Hungarian Empire, the one who might have been the bearer of the old Imperial Crown many decades after the establishment of the Austrian Republic.

When Franz Joseph’s funeral took place In November 1916, at the tender age of 4, Otto of Habsburg first appeared publicly as an official representative of the House of Habsburg. Little Otto’s presence at the funeral dwelled in the memory of many and public opinion regarded him as a symbol of innocence and hope of a new beginning. He attracted the sympathy of the crowds in a very difficult moment not only for the war-torn Austria – Hungary, but also for the monarchy. It was dealt a terrible blow after the death of the one who ruled 68 years in Vienna and was the symbol of the unity of the Empire.

Otto at Franz Joseph's funeral with his parents, Emperor Charles I of Austria and Empress Zita, 1916

During his childhood, Otto witnessed his parents’ efforts to regain their lost power. At the age of 9, his father – Charles I of Austria, the last Emperor of Austria – Hungary – died and his last wish was that his son would be close to his death bed, in order to see how a “Christian returns to his Creator”.

After Charles I of Austria became Emperor, Otto was groomed for his future ascension to the imperial throne. He was raised to become the future leader of the dynasty in the hope that, one day, he would regain his throne. Since his father had never officially abdicated, his family and the Austro-Hungarian legitimists had always believed Otto to be the righteous Emperor of Austria – Hungary. When Otto came of age in 1930, he became the official head of the Habsburg Dynasty. 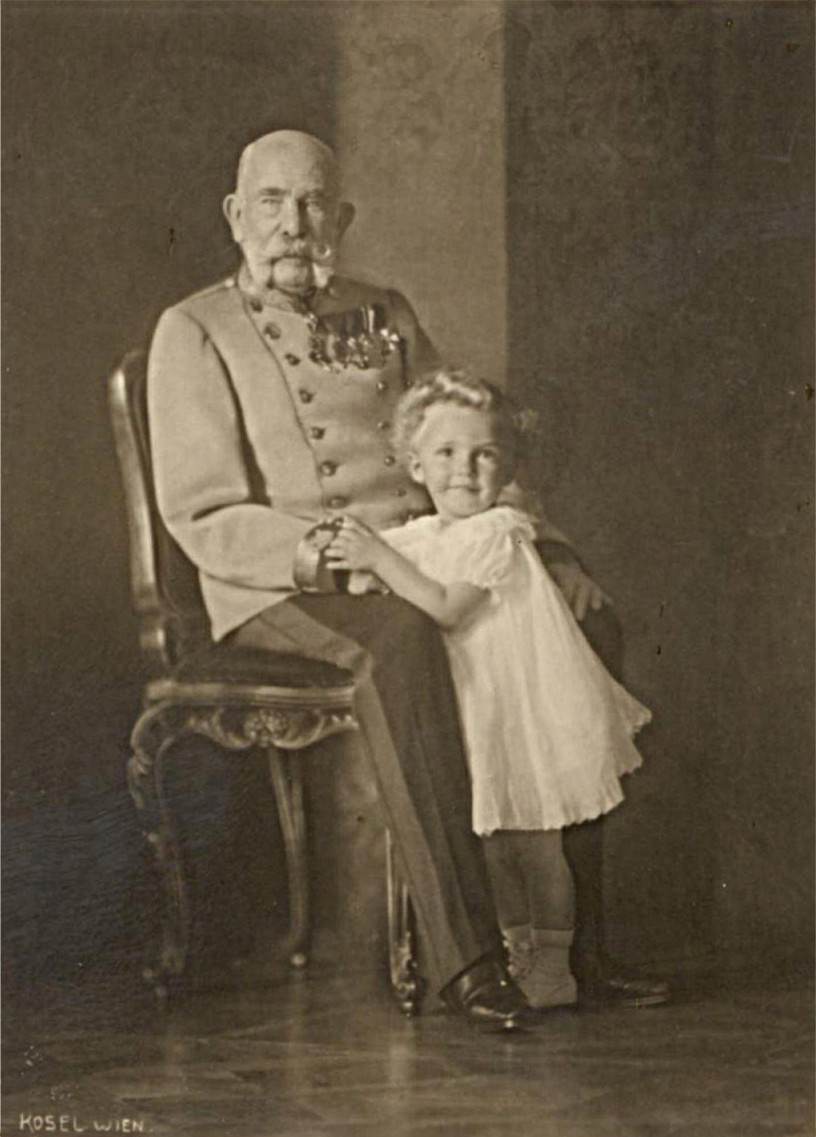 Little Otto with the Emperor Franz-Joseph

The legitimist claims of the Habsburg dynasty were reflected in young Otto’s education:in the beginning, he was appointed private lecturers, while in his last years of studying, he went to a catholic school in Luxemburg. Even his exams were organised in the fashion of the late Austro – Hungarian Empire. Thus, Otto was examined by a group of Austrian and Hungarian teachers. After finishing high school, Otto went on to study law and political sciences in Belgium at the University of Leuven. There he was enrolled under the name “The Count of Bar” which was one of the titles of head of the House of Habsburg – Lorraine.

In 1932 – 1933, Otto spent a semester in Berlin where he witnessed the NSDAP’s ascension to power. In 1935, he finished his studies and went on to get his PhD in law. In the year 1936, Otto became a member of the Pan-European Movement led by Coudenhove – Kalergi which aimed at uniting Europe on the basis of the democratic and Christian principles against the totalitarian and nationalist tendencies of the time.

Yet, in the meantime, the political atmosphere changed in Austria and the public opinion – at least the conservative and catholic circles – began to understand the positive side of the Habsburg legacy. In 1931, the city of Ampass in Tyrol named Otto citizen of honour, this being the first sign of the changing attitudes in Vienna towards the old dynasty. Moreover, it rapidly became a national movement:until 1938, Otto was the citizen of honour of 1603 Austrian cities.

However, politics would evolve in a direction contrary to the monarchist movement. After the Anschluss, the Austrian monarchists were persecuted and Otto – sentenced to death by the Nazis-fled to the USA from where he continued to militate against the totalitarian movements. At the end of the war, Otto returned to Europe and lived for a few years in France and Spain. Because the Nazis annulled his passport and Austrian citizenship and thanks to Charles de Gaulle’s personal intervention, Otto received a passport from the Principality of Monaco.

In May 1956, the provincial government of Lower Austria recognized him as an Austrian citizen, yet the Ministry of the Interior approved of it, only if Otto accepted the name Otto Habsburg-Lothringen. However, the process of becoming again an Austrian citizen was prolonged and complicated. The Austrian government asked Otto and his family on numerous times to relinquish the privileges of the House of Habsburg, the legitimist claims and to accept the status of private citizens. As of June 1961, Otto officially declared his loyalty to the Austrian Republic, yet only after four years did he and his wife receive the Austrian citizenship. Because of the Socialist opposition, they received their passports in 1966 when the People’s Party came to power. In 1966, Otto visited his homeland for the first time in 48 years.

In July 2011, Otto of Habsburg died at the age of 98 and was buried in the Imperial Family’s crypt in Vienna.