American History X - Has anything you've done made your life better?

Lately, Europe has experienced an important change in its political landscape:in the Elections for the EU Parliament, many right, far right as well as extreme right political parties or groups have won the votes of the European nations. Under these circumstances, one cannot help, but wonder:what is happening in Europe? Did they forget that easily the tremendous efforts of the Allies, in order to win against the Nazi totalitarianism? Does Europe need to be reminded of the atrocities this ideology and its implementation brought about? And not only far right totalitarianism, but also extreme left or any kind of terror based, hate-inspired regimes.

What led to this unusual rise in the far right loyalties may be explained by the Tony Kaye movie suggestively entitled American History X. I am inclined to say that maybe the inspiration to add the final X came from Malcolm X, the inspiring African American leader and fighter for the Civil Rights Movement. However, the film tells the common story of a family which is deeply rooted in the prejudiced tradition of WASP (White Anglo – Saxon Protestant) of the American society. So what it is about it that you have to write an article on it, you wonder?

The most important and shocking thing about it is the dramatic journey the lead character – Derek Vinyard-embarks on:from a fiercely and firm believer of WASP, leader of a white supremacist group and convicted felon involved in two hate crimes, after years spent in jail, he becomes the one who tries to destroy the very idea of racism in his circle of friends and decides to make people understand that a society based on any kind of discrimination has no chance of existing and facing the challenges that may come about.

The master performer of this movie is Edward Norton as Derek Vinyard who is seen in the beginning in a very aggressive stance which becomes even more acute when the viewer is presented with his bare chest where can be seen a tattooed Nazi swatiska. So, we understand very early on how much he believes in the white supremacy propaganda and gets to actually show it when he seems to have noticed that an African – American may break into his house. Instantly, Vineyard decides to do away with him, grabs the gun he owns, shouts at his family to stay indoors, goes outside and brutally murders the man and one of his friends.

His brother, Danny, was absolutely terrified and even physically ill that his own brother could have done such a thing. Yet, before being handcuffed by the police, Derek smiles arrogantly as if what he had done was an act of heroism or bravery which actually saved the white race from doom. It had nothing to do with that and just a completely wrong to think of it as such. It was just an act born out of xenophobia and deeply rooted racial prejudices, a voluntary manslaughter which brought him three years in jail and the destruction of his family. It seemed that all the internalized hate and murderous instincts had a boomerang effect on his own life which changed it completely.

In jail, Derek went through an almost religious experience which dramatically proved to him the futility of hate. Well, my conclusion is:Hate is baggage. Life's too short to be pissed off all the time. It's just not worth it.Talking to his former history teacher from high school, he discovered that there may be something wrong with his own self, his attitude towards life in general and his core beliefs and value system, rather than with the society and people of different races who are guilty of just existing. Externalizing one’s problem into blaming whoever else seems to be available and fit as an escape goat does not lead to an actual solution, but more unresolved issues and even more hate against people. Not being able to actually find the causes and solutions to one’s own problems are a deficit of the ego and are not to be translated into an alter ego who hates and dismisses people based on their ethnic, religious etc background. 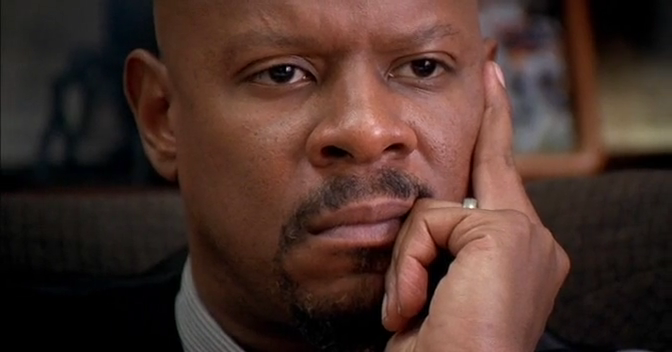 Bob Sweeney:There was a moment, when I used to blame everything and everyone for all the pain and suffering and vile things that happened to me, that I saw happen to my people. Used to blame everybody. Blamed white people, blamed society, blamed God. I didn't get no answers 'cause I was asking the wrong questions. You have to ask the right questions.

Bob Sweeney:Has anything you've done made your life better?

So, maybe that is the message which American History X is trying to get across: that each and every one of us needs to deal with their own problems, before we go out and make an attempt at changing the world according to our twisted standards. Far right or left extremism is and will never be the correct answer to our own fears and prejudices and also, it is not the answer for an identity crisis whereas societies as a whole are concerned. But before such a movement reaches the streets and influences politics, it has to be dealt with from the grass roots: people should be educated to believe in freedom of speech, freedom of choice, belief and to internalize the fact that no matter how different we may appear on the outside, there is no difference inside ourselves: we are all human beings, we all have a soul which vibrates to the slightest touch and we all fear rejection. Setting standards for how people should look or be and reviving old nationalistic and identitary prejudices is not a valid option.

Derek Vinyard: I'm not. I'm lucky. I feel lucky because it's wrong, Danny. It's wrong and it was eating me up, it was going to kill me. And I kept asking myself all the time, how did I buy into this shit? It was because I was pissed off, and nothing I ever did ever took that feeling away. I killed two guys, Danny, I killed them. And it didn't make me feel any different. It just got me more lost and I'm tired of being pissed off, Danny. I'm just tired of it. What is all the more interesting is that Derek is being led to this incredible change by two men of African American origin who manage to make him see the light. The church-like experience brought about by these people is brutally “completed” by a dramatic fight and rape suffered by Derek. Thus, he manages to understand that he has to immediately change his world view or he would suffer even more, because in jail, he found out that people do not actually care for the ethnic/racial divisions as they may seem to do outside of it. Every “minority” was actually subtly cooperating with one another to make it through a life in jail. Thus, Derek’s core values were shaken as well as his physical body. Yet, the violent external wounds inflicted on him hurt less than his internal ones. That was the moment of his revelation:to become a freer version of himself, to get rid of his prejudices and to completely alter his life.

Yet, just when the viewer thinks everything has settled down and finally the brothers learned to let go of racism and to lead a better life, Danny is shot to death in the highschool bathroom by a schoolmate of African American descent who confronts him about what happened. The viewer is taken aback when the movie ends with a dialogue between Danny and Derek which is reminiscent of their Neo-Nazi days:

Danny Vinyard:[offscreen, to another skinhead] Hey man, want a toke?

Derek Vinyard:Curtis, what are you doing? Weed is for niggers. You put that away right now. Have a little self respect.

And thus, here may be the answer to the rising tide of the far right in Europe:people should be brutally honest with themselves, find what is bothering them and then try to make a change in the political regimes or ideologies. As American History X and Edward Norton’s wonderful performance get to show us is that nationalism, prejudice, stereotypes and xenophobia should never be a choice, because a middle way and compromise could be found in everything. But it has to start within ourselves.