"We Shall Fight on the Beaches"

Winston Churchill delivered one of the most-or maybe the most-memorable speech in radio history in the United Kingdom. His rousing words defined the "Spirit of Dunkirk" and managed to encourage the English soldiers and the home front to believe that the British Isles would never be overrun. Of course, the speech is a master piece whereas manipulation is concerned, since it speaks about France and the UK having a good relation and fighting for each other's freedom, which, of course, did not really happen during the Interwar Period. However, it excelled at keeping people on the edge of their seats believing in the British authorities and in the ultimate victory of the Western World and principles.

The position of the B.E.F.(British Expeditionary Force)had now become critical As a result of a most skillfully conducted retreat and German errors, the bulk of the British Forces reached the Dunkirk bridgehead. The peril facing the British nation was now suddenly and universally perceived. On May 26, "Operation Dynamo "--the evacuation from Dunkirk began. The seas remained absolutely calm. The Royal Air Force--bitterly maligned at the time by the Army--fought vehemently to deny the enemy the total air supremacy which would have wrecked the operation. At the outset, it was hoped that 45, 000 men might be evacuated;in the event, over 338, 000 Allied troops reached England, including 26, 000 French soldiers. On June 4, Churchill reported to the House of Commons, seeking to check the mood of national euphoria and relief at the unexpected deliverance, and to make a clear appeal to the United States (...)

Turning once again, and this time more generally, to the question of invasion, I would observe that there has never been a period in all these long centuries of which we boast when an absolute guarantee against invasion, still less against serious raids, could have been given to our people. In the days of Napoleon the same wind which would have carried his transports across the Channel might have driven away the blockading fleet. There was always the chance, and it is that chance which has excited and befooled the imaginations of many Continental tyrants. Many are the tales that are told. We are assured that novel methods will be adopted, and when we see the originality of malice, the ingenuity of aggression, which our enemy displays, we may certainly prepare ourselves for every kind of novel stratagem and every kind of brutal and treacherous maneuver. I think that no idea is so outlandish that it should not be considered and viewed with a searching, but at the same time, I hope, with a steady eye. We must never forget the solid assurances of sea power and those which belong to air power if it can be locally exercised.

“I have, myself, full confidence that if all do their duty, if nothing is neglected, and if the best arrangements are made, as they are being made, we shall prove ourselves once again able to defend our Island home, to ride out the storm of war, and to outlive the menace of tyranny, if necessary for years, if necessary alone.

At any rate, that is what we are going to try to do. That is the resolve of His Majesty’s Government-every man of them. That is the will of Parliament and the nation.

The British Empire and the French Republic, linked together in their cause and in their need, will defend to the death their native soil, aiding each other like good comrades to the utmost of their strength.

Even though large tracts of Europe and many old and famous States have fallen or may fall into the grip of the Gestapo and all the odious apparatus of Nazi rule, we shall not flag or fail. 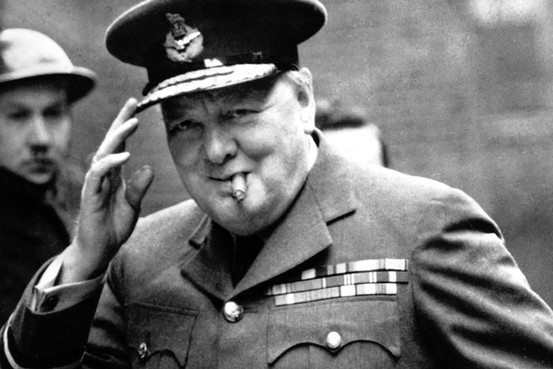