Martin Luther King Jr. – The Dreamer and the Achiever

Martin Luther King Jr. was one of those people that only comes around in this world once in a lifetime and we were very lucky to have him here for some time with us, until someone tragically decided it was time to bring his inspirational and amazing life to a halt. He fought for his convictions and always hoped that the country he lived in and the world would be a better and safer place, because  <one day this nation will rise up and live out the true meaning of its creed:"We hold these truths to be self-evident; that all men are created equal">.

However, what happened in Ferguson, Missouri, USA these past few weeks has proved that maybe his wish is still a dream after all. An unarmed 18-year-old man of African American origin, Michael Brown, was shot to death on the streets of Ferguson by white police officer Darren Wilson. The causes are still disputed, yet it is almost clear that Brown had not committed any crime or injured anybody, but it was an excessive act by a racist police officer. Since then, people of all ethnicities were very much affected by the shooting and Reverend Al Sharpton decided to recreate Dr. King’s march whereas others came with billboards which read “I Am a Man” just like during the Civil Rights Movement. 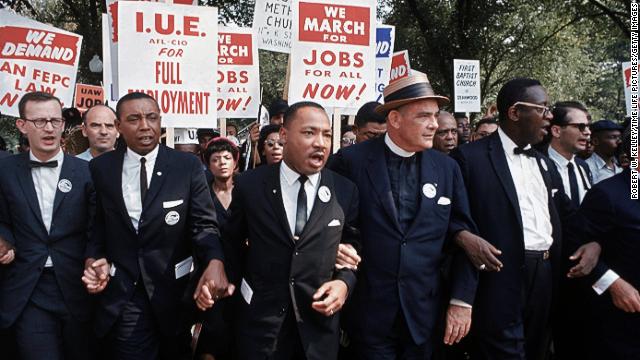 So, I cannot help, but wonder:did people like Martin Luther King, Malcolm X fought and died in vain? Didn’t their incredible lives teach us anything? I believe this question cannot be answered right away, it is still to be answered by each of us.

Michael Lewis King was born in Atlanta, Georgia on January 15th, 1929 and was renamed Martin Luther in 1934, after his father attended the Fifth Baptist World Alliance Congress in Berlin, Germany and decided to change his and his son’s name in the honour of Martin Luther, the Protestant reformer. Although he had some issues with the Christian teachings, Dr. King became a pastor and would often quote from what the Gospels. He thoroughly believed in “turning the other cheek” and would go to great lengths to prove just that.

The pastor was against violence of any kind in the Civil Rights Movement and even dismissed Malcolm X’s approach. He used the power of words and acts of nonviolent resistance, such as protests, grassroots organizing, and civil disobedience to achieve seemingly-impossible goals. He went on to lead similar campaigns against poverty and international conflict, always maintaining fidelity to his principles that men and women everywhere, regardless of color or creed, are equal members of the human family[1]. King, among others, was an organizer of the March on Washington which took place on August 28th, 1963.

Although it was supposed to pressure the Administration and Congress to change the legislation by showing the hard life of the African Americans in the South of US, the Kennedys managed to soften its tone. That is why Malcolm X called it the “Farce on Washington”, since it missed its main objective of clearly showing what the African Americans had to put up with daily and the members of Nation of Islam did not attend it. Its scope was downgraded, although the marchers still requested the end of segregation and equal social and work rights for African Americans and whites.

However, despite the allegations from other African American activists and controversies, the March enjoyed a great success and was very big throughout the US. It signaled that something was profoundly wrong with the society and the way it perceived freedom and equality for everybody. Also, during the March on Washington, Dr. King delivered his most famous and inspirational speech(click the link to listen to it) and one of the best written pieces in English language:

I have a dream that my four little children will one day live in a nation where they will not be judged by the color of their skin but by the content of their character.I have a dream today.

He was recognized for his oratorical talent and his speeches are even today regarded as some of the best in history. His 1963 speech and activity facilitated the passage of the Civil Rights Act of 1964 which prohibited legally the racial discrimination in every public institution and facility, guaranteed voting rights to every American citizen and equal rights whereas housing, work and health was concerned.

Also, in October 1964, he received the Nobel Peace Prize for managing to bring about a change whereas racial inequality was concerned only through nonviolent actions. He was also the youngest person to receive the Nobel and delivered a rousing speech with the now much quoted phrase:“I believe that unarmed truth and unconditional love will have the final word in reality. This is why right temporarily defeated is stronger than evil triumphant.”

Between 1965 and 1968, Martin Luther King was involved in campaigns for economic justice – Poor People Campaigns-and against the US involvement in the Vietnam War against which he publicly expressed doubts. He was organizing a final March on Washington, in order to claim economic aid to the poorest communities in the US when his 13 years of nonviolent civil disobedience were abruptly ended on April 4th, 1968 at the Lorraine Motel in Memphis, Tennessee.

“There is nothing new about poverty. What is new, however, is that we now have the resources to get rid of it. The time has come for an all-out world war against poverty … The well off and the secure have too often become indifferent and oblivious to the poverty and deprivation in their midst. Ultimately a great nation is a compassionate nation. No individual or nation can be great if it does not have a concern for ‘the least of these.”

He received posthumously the Presidential Medal of Freedom and the Congressional Medal while since 1971 in various cities and states and since 1986 at a federal level, the third Monday from the month of January is considered the Martin Luther King Jr. Day. Since 2000, it is officially observed in each of the 50thAmerican states. In his honour, numerous streets in the US have been renamed and also, a county. In 2011, a statue of Dr. King was erected on the National Mall, the historic site in Washington where his March took place in August 1963. He was the first African American and also, the forth non president to receive such an honour. Moreover, ever since 1980, King’s house in Atlanta, Georgia became a National Historic Site and placed second on the Gallup’s List of Most Widely Admired People of the 20thCentury.

So, indeed, Martin Luther King Jr. was and is regarded and as one of the most important people in the Civil Rights Movements, yet why isn’t his legacy fully respected? Why are there still racial murders just like the one in Ferguson? Why some people are still feeling like African Americans are somehow inferior, because of the colour of their skin, even though it is incredibly wrong, degrading, illegal? I’ll leave that to you to ponder and while you are at it, spread the word about it. Racism is not the answer and will never be.

“Racism is a philosophy based on a contempt for life. It is the arrogant assertion that one race is the center of value and object of devotion, before which other races must kneel in submission. It is the absurd dogma that one race is responsible for all the progress of history and alone can assure the progress of the future. Racism is total estrangement. It separates not only bodies, but minds and spirits. Inevitably it descends to inflicting spiritual and physical homicide upon the out-group.”