Freedom and the Dead Poets Society

Everywhere around us, people talk of freedom and do whatever they feel they should, in order to achieve it:they fight wars, they kill each other, some write poems, novels or shoot movies. We’re always talking or thinking of freedom, because it is the most powerful force in history, even if we realise it or not.  And this is the subject matter of the 1989 “Dead Poets Society” movie set in 1959 Vermont.

Here we are able to witness a very serious and engaging Robin Williams who is Mr. John Keating, an English teacher to the famous, yet conservative, male-only high school “Welton Academy”. He asks his students to call him “O Captain, my Captain!” by referring to a Walt Whitman poem, if they would like to be different and more daring that in other classes. Also, Keating is the one who manages to inspire the boys not to accept everything that comes their way non critical, even if it comes from their established teachers. For instance, in their first class, the students are instructed by Keating to rip off the introduction to a book on poetry which explained to them how to mathematically calculate the quality of a poem. Some of the boys are in awe that one of their professors had the courage to actually tell them this and decide to follow his advice of Carpe Diem(Seize the Day). Others are scared and find it easier to just stick to whatever they knew beforehand. Yet, those who decide to follow their Master’s ideas find out that he was also a student at Welton and that he created a literary club entitled Dead Poets Society.

Keating warns them against reviving this club, since it would not be to the liking of the new school leadership, however, the boys would not let their new found outlet escape their hands. Neil Perry, Todd Anderson, Knox Overstreet, Charlie Nuwanda Dalton, Richard Cameron, Stephen Meeks and Gerard Pitts went at night into a cave into the woods near their high school where they started reading and creating poems and talking about the real issues they had:the school’s strict discipline which added to the burden of growing up to the expectations of people around them. Of course, this is what we all go through and this is what makes Dead Poets Society a truly great movie. 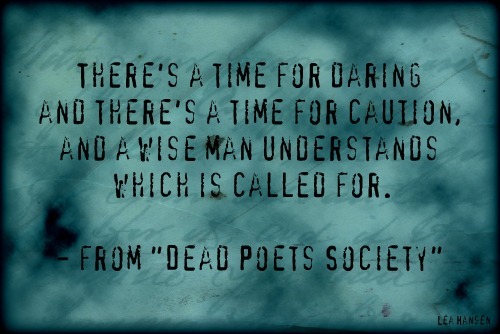 You don’t have to be Knox Overstreet to fall in love with a woman from another high school (read another world) and try to make her see how much better you are than her aggressive boyfriend. But what you can learn from him is to be free, do your best and let it go, if it does not turn out as you wished for:inspired by Keating’s words, Knox courageously goes to her high school and read her aloud the poem he wrote in which he express his love for her. In the end of the movie, we are not told whether she chooses Knox over her boyfriend, yet Knox rejoices in the fact that he was able to tell her what he felt regardless of the consequences. This is indeed the core message of the movie, in Dr Seuss’ words:Be who you are and say what you feel, becausethose who mind don't matterand those who matter don't mind.

So, Knox did whatever he thought was good, regardless of the fact that maybe his love interest did not respond in the way he would have expected. This is what we should remember for the rest of our lives:in order to lead a fulfilling life, one must be prepared to be ridiculed, ignored and even disliked for what we do, say or feel, if those are the things we know in our heart we should be pursuing.

Also, you don’t need to have a semi-secret group entitled Dead Poets Society and a code of honour to enter it to point out what is wrong with the system you live in. Talking freely about the faults in the democratic or not so democratic regimes or their foreign policies is what keeps this world evolving, because, eventually, people’s dissatisfaction will reach those in power and at some point, they will either make the necessary adjustments or will be left behind by the new changes.

No matter what anybody tells you, words and ideas can change the world.

Dead Poets Society is indeed a great movie, because it recreates the world in miniature:the Welton Academy. A conservative, male dominated world where boys are told what to do from very early on or else they will disappoint their fathers, mothers and upset family traditions. When Charlie “Nuwanda” tells the headmaster nonchalantly that God called and He demands to accept women at Welton, he receives a physical punishment and also, the “you cannot change the system” talk. Also, there is the story of Neil Perry who is very fond of acting which became, as he claimed, his reason to live. Yet, his father wants him to become a doctor and even makes him leave Welton, his friends and way of living. Unable to speak his mind in front of his father, Neil decides to call it quits with life and to commit suicide.

Boys, you must strive to find your own voice. Because the longer you wait to begin, the less likely you are to find it at all. Thoreau said, "Most men lead lives of quiet desperation." Don't be resigned to that. Break out! break out now is the time!

Without thinking, Keating is immediately blamed for Neil’s suicide, since he encouraged his passion for acting, instead of following his father’s “orders” not to do so. However, this conclusion could not be further from the truth:the only thing Keating did was to encourage the students to think critically, to be free, to be in tune with their own feelings and desires and to let go whatever the society, their parents or teachers tell them to become. Maybe Neil took it too far, but it gets to show us what societal/parental pressure is able to do with all of us:it crushes our desires, ambitions and tells us we cannot achieve them try as we might and also, it punishes us for not doing anything.